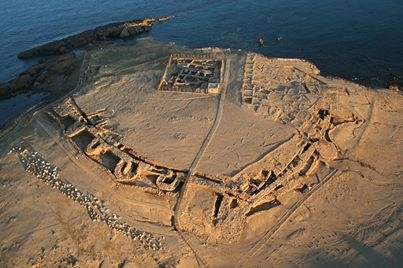 In place Palamari, located on the northeastern coast of Skyros 13 km. Northwest of the country, discovered by the archaeological department, a large historic settlement.

This is a very well-fortified settlement – port, one of the most important prehistoric settlements of the Aegean Early and Middle Bronze period (2500 – 1800 BC).

Excavations have revealed remains of buildings and roads, and it is evident the organized planning of the settlement. In the village beach there are still traces and remains of the port, which had commercial contacts with the Cyclades, eastern mainland Greece, Evia and the North Sea. The settlement had organized urban planning, with streets, mains and impressive homes. In rooms and courtyards they found stone terraces, fireplaces, furnaces and shaped floors.

Also found numerous pottery, stone tools and utensils, bone tools, metal utensils, obsidian processing residues and local flint. Most of the findings of Palamari exhibited in a special showcase at the Archaeological Museum of Skyros. The remains of the wall and its design indicate that the settlement was well fortified, enhanced with massive U-shaped bastions, rampart, moat and stone dam. The fortification of a kind Syropalaistianiakis origin, appeared in the Aegean around 2300 BC. Within walking distance from the archaeological site, there is the beautiful beach of Palamari, where the crystal clear waters will cool off and enjoy your day.