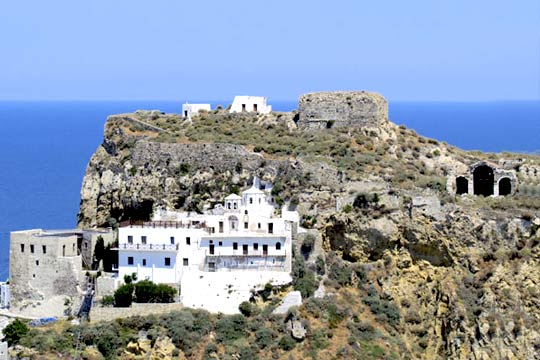 At the highest point of Skyros Chora on a steep cliff 179 meters above the vastness of the Aegean Sea, lies the castle of Skyros.

The rock was the center of the island events from prehistory and the mythological era. Here was the ancient citadel and seat of King Lycomedes. This part, was killed by the Lycomedes king of Athens Theseus while here and hid Achilles dressed woman trying to avoid the Trojan war. The citadel was fortified throughout the classic diamond necklace and later the Roman and Byzantine chronous.Ton 8th and 9th AD century Skyros suffered from raids by Saracens culminating in the sack of the year 900, so this must be seized and the castle. In the 13th century after the conquest of Constantinople by the crusaders (1204), Skyros passed to the jurisdiction of the Venetians.

In the castle there is the Monastery of St. George .The monastery founded in the 10th century by Nikiforos Fokas. It is a dependency of the Holy Monastery of Agia Lavra Holy Mountain and St. George is the patron saint of the island.